I didn't feel pain, 'cause no-one can touch me/Now that I'm held in your spell

It's been way too many days since I've posted and today (actually already tomorrow) isn't really an exception. I haven't had a day off work since last Thursday and while I spent over six hours in a coffee house online that day, I spent more time chatting and emailing with friends than thinking about the blog.

I promise more tomorrow when I will be suitably self-obsessed. In the meantime, who wants to hire me? I'm an ace exec assistant with a zillion years experience, I'm a DJ, I can craft a cunning piece of jewelry and sew a damn cute purse. And, last but not least, I can boss around baristas while making a delicious latte with one hand tied behind my back. Come on, I need a job, people!

Well, I built me a raft and she's ready for floatin'/ol Mississippi she's callin' my name/catfish are jumpin'

Wanting to do something out of the ordinary on Thursday, because Steve and I had two consecutive days off together, I thought of day trips we could take. My first inclination was to drive up to Springfield, IL for the state fair, but Steve wasn't terribly excited about that. He doesn't have the enthusiasm for peering endlessly at goats and sheep that I do. Plus, all the poultry showings were over and I do love the chickens.

Next on the list was a trip along the Great River Road past Alton, IL and Grafton, IL to a place that Roy Kasten has opined has the most delicious fresh peach drinks ever. Now this appealed to Steve.

We got a somewhat late start on Thursday morning, not leaving until around 11:00am. The weather was gorgeous, overcast and just barely 80 degrees. Seriously, this is August in St. Louis? We got on the road and headed northeast. It seemed that neither of us felt particularly chatty and we settled into a comfortable quiet, just listening to the radio. The drive, through Baden in north St. Louis, Alton, and Grafton was easy -- little traffic, and only a few idiot drivers.

Starving by the time we got to Grafton, we decided to forego the antique and junk stores and head right for the Brussels Ferry to get to our restaurant destination, Kinder's, at the Golden Eagle Ferry landing in Calhoun County. I've never been on a ferry, ever, so I was excited about crossing a particularly wide part of the Mississippi on the ferry in my car. And since this one is owned by the Illinois DOT, it was free. I don't have a particular problem with motion sickness, though I do have some vertigo issues, but the movement of the ferry while sitting inside my still car made me feel drunk and disoriented. Not in a terribly bad way, but it was a weird feeling, like my head was swiveling loosely on my neck. As soon as I hit land again, I was fine, though the narrow, curvy and hilly roads of Calhoun County were rather challenging. Even after looking at the map, I'm still not quite sure where we were. It's odd that, according to the maps, the part of the river we crossed to get to Calhoun was not exactly the Mississippi, but a tributary. The county, though, was gorgeous. Lots of rolling hills covered with corn and soybeans; little shacky houses, next to trailer homes, next to McMansions, next to working farms and orchards. I could live there, happily.

We drove and drove and drove and finally made it to the Golden Eagle Ferry crossing and Kinder's. The place was kind of deserted but we were starving and thirsty and headed out to the deck to sit and ponder the river flowing past. We immediately ordered those frozen peach daquiris and were not disappointed. Sweet, icy, thick and beautifully orange with fresh peaches. Yum. 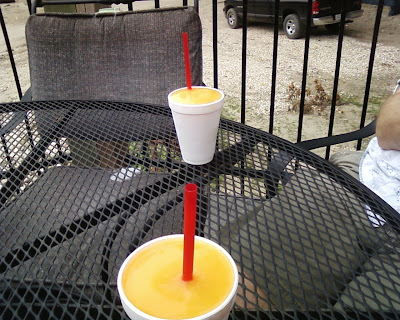 Fried green beans (how wonderful to take something healthy, coat it in batter, deep fry it and serve with ranch dressing!) and gigantic catfish filet sandwiches later and we were peaceful and relaxed. See? 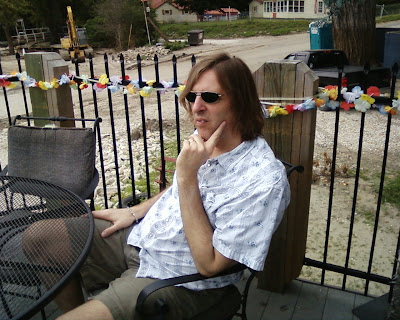 We ate and ate and drank and drank and watched the ferry take and retrieve countless vehicles to and from the Missouri side of the river. At one point we noticed that when the ferry docked, sometimes big fish leapt out of the water, showing us their shining white bellies. Startling and funny. We were practically alone on the deck (our only compatriots left less than halfway through our visit) and we again settled into a peaceful, comfortable silence. Even my brain was still and contented. No racing thoughts, no worries, nothing. I suggest watching a ferry for relaxation anytime. 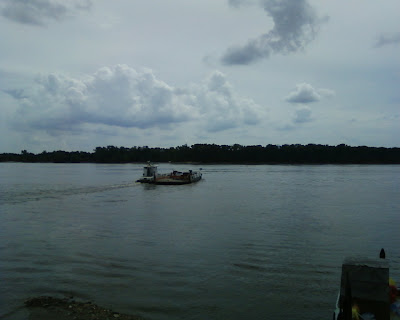 After probably a couple hours we decided to hit the road for home, with a stop or two planned to get some fresh vegetables at one of the many stands and orchards in the area. Three or four pounds of tomatoes, one odd zucchini, some sweet corn and a bag of peaches later, we were homeward bound. Even though it was was rush hour, we were heading in the opposite direction of most other cars so it was easy and fast. Since we were on "vacation" we stopped at the Wonder Bread outlet store to relive our childhood and buy our favorite treats -- Hostess Cupcakes for me and HoHos for Steve.

For dinner I tried to recreate the peach daquiris and I was somewhat less than successful, though they tasted okay. I overdid the lemonade aspect and the peachiness was way too far in the background. The main dish was going to have to contain some of those fresh vegetables, so I sauteed onion, garlic, that zucchini and a big, fresh tomato in olive oil and tossed the result with rigatoni and parmesan cheese. Delicious. 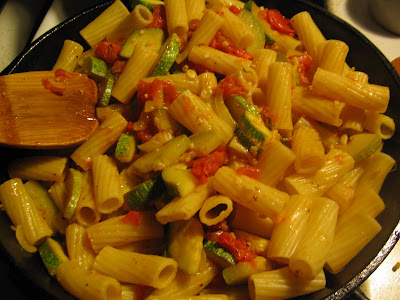 Wish I had more of it right now.

Later on I turned around and saw Lydia sprawled on the back of the couch, sound asleep. She looked so sweet and happy I had to take a picture. 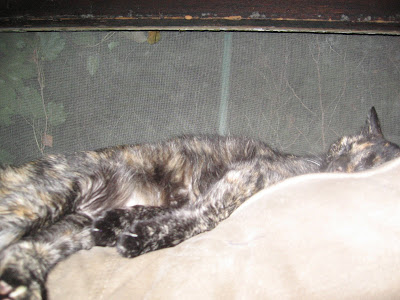 Last week was rather wearying, work-wise. Lots of long days into nights. By the time Friday rolled around, I was ready to do a whole lot of nothing, which is basically what I did with the first of my two days off. By the time evening rolled around (plus Steve working till 9:30p) I was feeling like being sociable. Dana had said she and Roy were going to see Jon Hardy and the Public at The Chapel that evening so I decided to meet up with them there. The Chapel is a rather lovely space, though the sound leaves something to be desired because of the high, peaked ceiling. The Marc Chagall stained glass window triptych makes up for any other deficits. Aside from the fact that there is two drink limit (though they are basically free), it's a very cool space. I look forward to going there again.

Steve met up with us near the end of the show (which was very entertaining -- they covered, very well, Springsteen's "Rosalita"!) and we headed to Pi for deep dish pizza. Yum. And though they intended to have an early night, I'm glad we got Roy and Dana to stay out with us, drinking and eating. Little did I know we were heading to the most dangerous area in the city due to some recent Metro-related attacks (see, my horrible week kept me away from the news too). Delmar was crawling with cops, though, and Joe Edwards, king of the Loop, was keeping watch as well. The smartass hostess at Pi who gave Dana the cold shoulder and attitude in order to kowtow to Joe had to feel pretty freaked out when Mr. Edwards headed to our table to say hello and apologize for tying her up. Hee hee!

Saturday dawned (well, sort of) with a giant glut of work to do to prepare for my first radio show since the beginning of October and the debut of my new Monday morning, three hour time slot. I spent a few hours downloading music, then ran around a bit with Michael to shop for focal beads for a necklace he wanted me to make. We drove out to Glasshopper in far west county (Olive and Fee Fee) and found some good stuff. I even bought some beads for making earrings, actually feeling almost energized to make more jewelry. After beads we had ice cream and wraps and did some grocery shopping at a weird, jenky Schnucks on Olive. West County is all about the Dierbergs, apparently. At any rate, I like how the necklaces turned out. 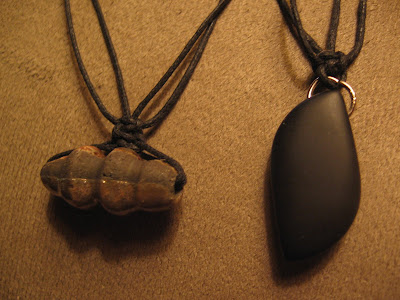 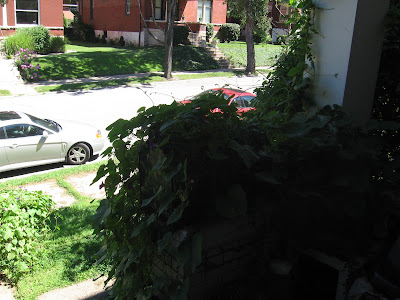 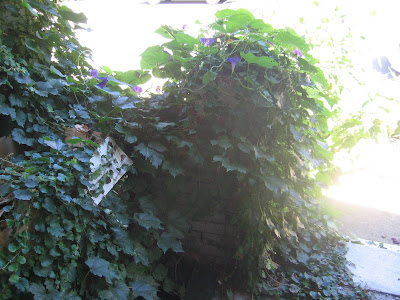 The prolific rose of sharon is nearly obscured by the other weedy vine. I know I should pull it up and cut it down, but its white flowers give off a most wonderful, heady fragrance that wafts directly into the living room and I can't bear to get rid of it. 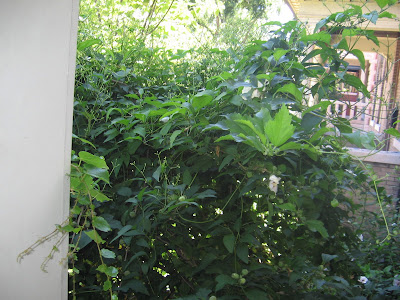 I'm sure it's no surprise to learn I'm a worrier. It's contrary to my no-planning nature and it's not chronic, but when it takes me, it's a chokehold. I woke up at 4am today, positively freaking out about work and the radio. Useless and a waste, I know.

As far as the radio thing goes, I have gotten my show back, and then some. Starting on Monday, August 11 at 7am, Emotional Rescue is back on the airwaves of KDHX 88.1 (listen online or stream later at www.kdhx.org) with a new three hour format. Holy shit, I hope I'm ready.

Regarding work, I made a sort of rash decision to tell my manager that I would go to the new store with her, after making sure Michael would be wiling to go too. Isn't the devil you know better than the devil you don't know? That's what I'm banking on. In the meantime, we're going to be working under the untested eye of a brand new and quite green manager in training. I hope I can survive it. We have no idea how long we'll remain at the old store and I'm not sure if I should relish my time left there (a ten minute drive!) or be in a hurry to get out (the new guy may be awful!)

Sigh. All this is happening at a time of the month when my mind is kind of crazy anyway. Next week things will probably seem less tragic. Keep your fingers crossed for me.
Posted by Unknown at 8/06/2008 10:33:00 AM 1 comment: 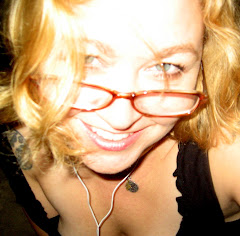 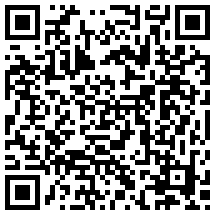